The thief who helped me heal

Following on from yesterday's post about what we might choose to take from our house if it were burning down, I want to share something that happened to me just over a year ago.
In yesterday's post I mentioned that a few years ago my sister and I'd had to empty my mother's bungalow in the three days after her sudden death.  On the evening of the third day, I sat with my siblings around a tray that had a few bits and pieces of more 'precious' items on it.
Our mother had survived our dad by eleven years, and there were things of his she had kept close too: what should we do with all these items?
We decided to share them out by 'gifting' individual pieces to each other with a reason why - and for the other siblings to be able to interject or disagree if they felt strongly about an item.
We took it in turns as we went around the table.
One of my brothers wanted the other to have our dad's medals.  He gave the reason that he'd always liked to look at them as a child, and that he would get the most from having them.  We all agreed.
I chose a silver ingot necklace for my sister that had been our mother's 25th wedding anniversary present.  I gave my reason why I thought my sister should have it, and it was agreed too.
Many tears fell that evening, but no disagreements took place and no harsh words were used; just happy memories of our parents.
As with all 'things' though, these were all items.
The memories they sparked were priceless.
Fast forward to last year.
My Gorgeous Daughter is getting married.
My ex husband is having nothing to do with the wedding.
GD and her chap are paying for lots of Wedding things, and I am paying for the part I want to pay for: my baby is getting married.
So begins the saving, the selling on eBay, the car boot sales; all to raise the thousands in addition to our usual living money.  And for the most part it is relatively stress-free.
And I put some items of jewellery that had been my mothers on eBay.
For three reasons:
1)  It's not her, and won't bring her back.
2) I don't wear it, neither will GD, and it's sat in a box for over a decade so far.
3) It's like she is giving GD money towards her wedding dress.
So I sell a particular piece.
This one, in fact: 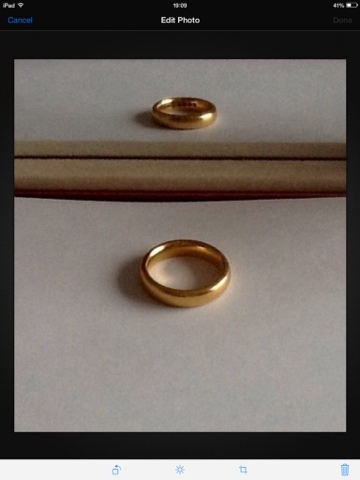 It had been my dad's mum's wedding ring.
My grandfather and grandmother had married in 1926, on Boxing Day.
He'd been a milkman, and had been out and done his milk round that morning before then getting married!
Dad had been born in 1931.
In 1944, during the war, grandfather was away fighting, and dad came home from school to find his mother had died. He never spoke of this to us kids, I found this out from mum after dad passed away.
So.  The ring.
I'd had it valued.
I advertised it.
I sold it for the 'Buy It Now' price.
They paid straightaway, into PayPal, and the funds cleared.
And I sent it recorded delivery.
Six days later, PayPal contacted me about the payment.
It had been made from someone else's bank account, not the person who's eBay account had purchased the ring.
They put a hold on the money.
And for six weeks I was in limbo - no ring (the police put me onto the ePolice who took full details, but I've never heard back from them), and no money either.
After six weeks I was incredibly lucky that PayPal refunded me.
I went through so many emotions - guilt was a big player: I'd 'lost' this ring, this family heirloom.
Yet I'd been happy to sell it to put towards the wedding dress.
And then it hit me.
If none of this had happened, then that obscure little yellow gold ring with it's wonderful story, might have sat for another decade or two or three in a dusty box at the back of a drawer.
When I passed away, who knows what might have happened to it?  Certainly by then it's story of origin would have got lost in the mists of time.
So I do thank the thief who stole my grandmother's wedding ring.
The grandmother I never knew.
The mother and father I adored.
It's all part of the healing process after someone dies: closure is what we strive for.
And this was one more piece in that jigsaw.