A pupdate (see what I did there!) 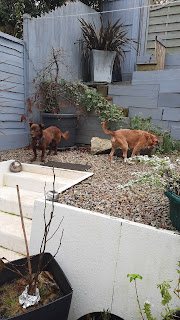 I thought I'd answer some questions on here and also give you an update on how he has settled in!

When he arrived, we took Viktor straight out into the garden.  We had left some Millie poo on our gravelly-bit, which is where she usually 'goes'.  Viktor sniffed around, then squatted and did the BIGGEST WEE I have ever seen a dog do!  Honestly he must have been peeing for three minutes?  Then a little more snuffling and sniffing, and he pooped near where Millie does hers.

It was drizzling when he arrived, and after the initial garden mooch, he seemed reluctant to come in - however we just left the door open and retreated, and he followed us gingerly.

I had placed a soft dog bed in the kitchen and also a pop-up soft dog crate; to give him a safe place to retreat to if needed.  He chose the soft round bed, and sat looking at us.  I put dog biscuits down with a little cooked chicken for both dogs, and he very quickly ate his.

Then he slept.  And snored, bless him!

When the van had arrived, we were asked to hand over a collar and lead so Viktor had his collar and tag on safely.

Later, after tea time and it was time for bed, we took his soft bed upstairs and he followed.  I put a puppy pad on the bathroom floor and showed him where it was - but we had no 'accidents' at all.

This morning I started to groom him.  It looks as if he has never been brushed - he is quite happy, but his fur is thick and very matted.  The advice is not to bath a rescue dog for at least 6 weeks, and we always stick to this.  When I do bath him, it will be in shallow warm water infused with simple oats.

First thoughts are that he has been in a harness for some time - he has healed scars on his nose and muzzle where he has no fur.  He also presents as a homeless dog - he eats very quickly (almost to the point of choking*) and is literally skin and bones under his matted fur.

*I have ordered a feeding bowl to help the dog eat slower.

To answer your questions:

1. We found him through a charity called Help for Hope.  I can honestly tell you that everything was so professionally managed; from our initial interview to texts saying what time he would be delivered here, from advice for settling nervous dogs to lifelong support for Viktor.

2.  We did not name Viktor, that is the name he was given when he was saved in Romania by the dog shelter.  Although he could easily have been given another name, Man Wonderful's dad was called Viktor.

3. We always choose rescue dogs for several reasons, the main being that the thought of unwanted dogs being killed makes me weep.

4. We are feeding him the same diet as Millie - a gluten-free solid biscuit mix.  Neither is GF, but the research (and our own experience) is for a healthy dog.  This is added to with raw carrots, small amounts of cooked meat occasionally and treats used for rewards (like Man Wonderful's red wine - NB this is only for MW!!).

5. Does he smell?  Yes.  Quite simply all dogs smell, and when they have been in a rescue centre it is quite 'ripe'.  After a few weeks I will bath him, but before then I am working a little each day taking away the excess fur that he has not shed due to it being matted.

6. Is he neutered and does he have a microchip? Yes and yes.  All my dogs are or get neutered.  Unless they are to be bred from or used for work (for instance gun dogs) then it is the best thing to avoid unwanted puppies or aggression in males.

7. Does he have to quarantine now?  No he doesn't.  He came with a full passport and a list of vaccinations longer than your arm!  He was also checked and vetted by DEFRA - he must stay in our home and garden for the first 48 hours, and we could have a visit from DEFRA any time in the first two weeks to check on him/us.

8. What is he like with your grandchildren?  He met little miss (7) yesterday and behaved the same as he does with us - greets you, has some fuss, sits/lays and looks at you.  This evening he will meet little lad (6).  I'm not quite sure how he will take little lad as he is autistic and uses loud sounds and hand-flapping movements.  This is why we introduced them on two separate days.  We have been wary of household noises, but as so far he is fine with the hoover, the coffee machine and me playing the piano (although not all at the same time: I'm not superwoman!!) I think he will follow how Millie behaves, which is ignoring little lad.

If you have any other questions, please do message me - either below or PM.

An addition:  when he arrived he was limping on his back right leg - we thought this was due to being in a van for almost 60 hours..but this morning I found that he has  disabled feet - one foot has three toes/claws with two toe pads 'fused' together - the other back foot has just one toe and the others look like they have been cut across at an angle with the toes and pads all but removed.

This could be a birth defect, due to being badly treated and left in a cage with urine burning his feet, or due to being deliberately hurt - we will simply never know.

What we do know is that he is now in his safe place, forever.  Tracey xx