Yes, I know it's the second week of October, and what do I mean, two more??

Well, the week before last I baked two loaf-tin-sized cakes to try out a recipe for a Christmas cake.   Man Wonderful loves to eat my Christmas bakings, and these two cakes went fairly quickly. (yes he is still a slim Jim).

The recipe was OK, but not quite Christmassy enough.

So yesterday I baked the second recipe I'm trying this year - the Kirsty Allsopp one, topped with whole almonds and brown sugar.

I added four cloves that I had ground in my pestle and mortar. And some cherries.

These are much more winter-spice tasting, and I'm waiting for the verdict whether I will try a different recipe, or make this recipe again.

It is SO much cheaper than buying cards. Seriously.

I bought a box of 100 plain white cards with envelopes for £4.99, and am cutting out star shapes from an old piece of manuscript that I  saved for this purpose.  The card is not shiny and is perfectly recyclable.

I've also begun wrapping up gifts before putting them into a large house-moving box (as we move house in ten days!!).  My paper is plain and recycled brown paper.  I use red and white butcher's string to wrap around and a recycled gift tag.  I also have some Christmas ribbon saved over the last few years, and I'm using that up this year.  The gifts look simple and beautiful. I'm really pleased not to use shiny non-recyclable paper.

I bought four tins recently that were reduced to just 69p each - two square, silver ones and two cylindrical ones in a red tartan pattern.  These are perfect for gifting homemade cookies, which I will bake just before gifting.  Just a note: one year I bought my brother a gift of a bottle of port and some Derbyshire stilton. I wrapped this up and gifted it a few days before Christmas, but forgot to tell him to put it in the fridge.  He put his gifts under the tree in his house...which was next to a radiator. He and his wife were trying to find the source of the stench.. and only found it on Christmas day when they unwrapped a stinking, moldy, melted mound of cheese...

Anyway, I won't be wrapping up my tins of biccies, and instead plan to tell the recipients that they contain home-baked niceties; so they can decide to eat or store and eat at a later date.

Other homemade items for Christmas are progressing...it's only 72 sleeps, you know!

I have almost completed a knitted hooded jacket for grandson.  I am planning to make mittens for the little people, and apart from the 'big' gifts I have completed my shopping.  Once we have moved, I plan to purchase the last of my gifts and get them wrapped and away before the middle of November.

I adore this time of year.  But then I adore organisation and saving money! 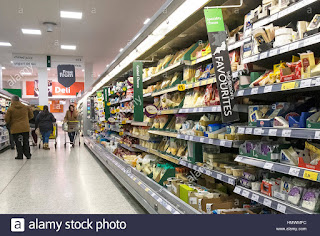 I am embarrassing to be with..!