No veg this year 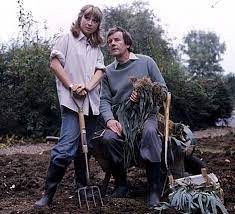 It was my dad who encouraged my interest in gardening.
Well I say gardening, but what I mean is growing veg.
I was a tot in the 70s (yes, I'm really that old! I know, it's the lighting that makes me look younger..) and that included a lot of penny-pinching: well before it became trendy!
My parents both took evening classes as they were free.
Instead of doing up the house they had bought in 1969, we all managed with no heating and little spare cash.
But my dad got the bug.
He converted our 1950s semi-detached garden (about 100 feet long) into something akin to The Good Life, and got a second-hand metal and glass greenhouse with a paraffin heater.
As a shift-worker, dad had three ten-hour day shifts followed by two 14-hour night shifts and three days off. He had five days where he could do a little tending - watering, checking on seedlings and slug-removal.
On his days off he would plan, plant, dig and rake.
Mum would take him cups of tea and they'd chat over a fag.
We had oodles of veg each year - runner beans, carrots, potatoes, radishes and tomatoes.
When Man Wonderful and I moved to the suburbs, I realised my little dream of having my very own veg patch.  He built me little rectangles out of scaffold boards that I used as raised beds, and I planted rhubarb, carrots, onions and runner beans.
After a couple of years I bought a small lean-to greenhouse that attached to the side of the house, and began growing peppers and chillis too.
Now we are in the wee house I have grown a little amount of veg in pots each year.
I have had success with tomatoes, green beans and herbs.
But this year we decided not to grow veg.
Well, Man Wonderful asked if I minded not growing veg this year?
He is very good about not being demanding; stating reasons why and why not instead.
We had a chat.
Man Wonderful said he would like a year off having veg in the garden; although I adore each stage - sowing and having seedlings on the kitchen windowsill / planting delicate seedlings out / tying up little twigs and sticks to make teeny scaffolding to help the plants stabilise / death by slug / watering in the cool evenings / watching bees in the daytime / then picking little bits here and there and enjoying the small successes..
Man Wonderful said that as the neighbour had a new fence installed last year all along one side of the garden and it needed painting, as did the rest of the fence this summer; it would be a lot easier if we only had plants in tubs this year.
I agreed.
And though I do plant veg in tubs; I did have a wee yearning for lots of flowery things amongst my herbs this year.
So.
In exchange for not growing veg this year, I negotiated having seeds and bulbs for flowery plants, and a bird feeder on a stick.
This year we have on our wee patio our metal table and chairs (that could do with a lick of paint), and flowers growing in pots in abundance.  I have mostly white flowers, as that is my thing, but also the herbs that I cut-and-come-again: rosemary, sage and lavender.
We have a gravel area up three steps that has an acer in a big pot in one corner and three big stones in the opposite corner, and up four more steps there is a tiny strip of soil that usually houses courgettes and strawberries, but this year is planted as an abundant bed.
So.
No veg this year, instead somewhere fragrant and peaceful to sit and read.
Take care,
Tracey xx